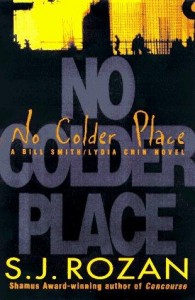 Bill Smith is going undercover again as a favor to an old friend who wants him to investigate thievery on the 40-story Manhattan site of Crowell Construction's latest project.

His bricklaying is a little rusty, but passable as he checks out the foreman who's under suspicion. A crane operator has disappeared–along with some heavy machinery.

But when a well-orchestrated riot causes the foreman's “accidental” death, Smith plunges into a morass of bribery, blackmail and blood looking for answers.

With the help of his Chinese-American partner Lydia Chin, he follows a trail of twisted loyalties, old-fashioned greed and organized crime to its heart-stopping conclusion.

Murder–with no end in sight.

“Rozan is a pro at designing a good mystery.” —San Jose Mercury News

“The protagonists' relationship and Rozan's solid plotting ably carry this admirable series.” —Publishers Weekly (One of their “Best Books '97”)

“This [is] the sharpest, clearest, most purposefully focused of her four Smith/Chin mysteries.” –Kirkus Reviews