Dark, cold and rainy in NYC, and I must say I prefer this to sunshine as a re-entry after a terrific long weekend in Long Beach at Bouchercon. This is emphatically a New York November day. Out in CA, lots of sun but a little chill in the air, not enough to keep easterners from drinking our coffee (or later in the day, other stuff) by the pool because we could. Hanging out with the buddies I don’t get to see often filled most of my time, but I also managed to do two panels and to interview the Fan Guest of Honor, Al Abramson, although in truth Kent Krueger did the heavy lifting on that and I just stuck in wisecracks from time to time. And there was some urban birding, resulting in white pelicans, cormorants, sandpipers, coots, gulls, and a group of small diving birds about half the size of a cormorant. They were fishing in the ocean near the rocks but I couldn’t get close — anyone know what they might have been?

And there was also the annual basketball game, submitted here for your consideration. A rare outdoor game, but it was, after all, Southern California. 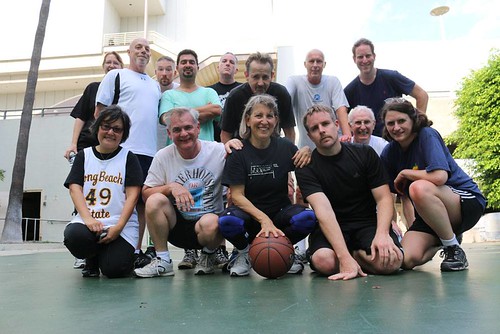