The Thanksgiving Adventures of the Five-Berry Pie

I bought a pie — blackberry, raspberry, blueberry, strawberry, and cranberry — on Wednesday, to take to my sister’s house in Philly, where I was headed for the holiday. The Greenmarket where I got it is near the Rubin Museum. I was going there, but I went to the market first, to make sure I got what I wanted. Then I went to the Rubin, but I didn’t want to endanger the pie by carrying it around the museum. So I took it to the checkroom, giving the coat-check guy a chance to add “May I check my pie?” to his list of Sentences I’ve Never Heard Before.  All well and good, unchecked the pie and took it home when I was done.

Next morning, the plan was to head down to the Staten Island Ferry and meet the illustrious JL on the other side, then drive to Philly, which is how we do it every year. Since I was planning to go to the gym without going home first when I got back Friday, I packed up the pie and detoured to the gym Thanksgiving morning to drop off some stuff I’d need. Then the pie and I took the subway to South Ferry.

When we got to the ferry terminal, however, I got a phone call from the illustrious JL: he was sick as a dog, could not go! I wished him well (he sounded awful) and thought, Uh-oh, what now? Here I am at South Ferry with a pie and the need to get to Philly, no plan to get there and it’s Thanksgiving Day.

I walked over to a picnic table, settled the pie, and started searching buses online. Amtrak, I was sure, would be sold out and cost a fortune besides, but they were my next plan. But lo, Megabus had a few seats left on the 2:45. I grabbed one up.

And now there I was at South Ferry at 10:15, on a gorgeous day, with four hours to spare before my bus. I could go home, but the weather was too spectacular. I could walk up to the bus, though that’s a little farther than I was prepared for, carrying the pie. I could walk partway, and then sit and have a cup of tea. Before I decided, though, I needed a bathroom. I started back to the ferry terminal, but a thought hit me: the Smithsonian’s NY branch of the National Museum of the American Indian is right there. All Smithsonian branches are open 365 days a year — this one too, yes?

Yes! The pie rode the conveyor belt through the X-ray machine. That museum used to have lockers, so I thought I might be able to check the pie in a second museum — surely a first for any pie — but no lockers any longer, so after the trip to the ladies’ room, where I sat it on the window sill, the pie and I went to the “Transformers” exhibit, which I’d wanted to see anyway.

After the Museum, I started to walk uptown. How far I’d go. whether I’d have tea, was still undecided, when I ran into Diane Fusilli. We exchanged hellos, and she told me her husband and granddaughter were upstairs — we were right outside their building. So I went up to visit with Jim Fusilli. I walked in and said, “I brought a pie, but it’s not for you.” Jim and I had a cup of tea and caught up, played with the adorable granddaughter, and then I picked up the pie and walked on. I took the A train to 34th St., thinking maybe I could go standby on the earlier bus.

The walk from 8th Ave. to almost the river, where the bus leaves from, is very long, but the day was still beautiful. Since Jim’s tea had been herbal, I bought a cup of caffeinated tea from a food truck on 10th Ave. and sat on a park bench to drink it, the pie beside me. Then I went on, and when I got to the bus stop I asked the guy whether I could stand by on the 1:50. It was only 1:20 so I figured I was in plenty of time. Haha– the 1:50 wasn’t running that day.

Now, I’d had Jim’s tea, and the other cup, too. No way I was going to wait in the cold for over an hour for my scheduled bus. So the pie and I hiked back to 9th Ave., to use the facilities at the diner. Then we hiked back. The pie sat on the sidewalk with me next to it, waiting for the bus.

The bus pulled up right on time. I settled in, and when we left, the bus wasn’t full, so the pie had its own seat beside me. The bus ran late getting out of NYC because the Thanksgiving Parade spectators and participants were leaving at the same time. For awhile, trying to get into the tunnel, were were behind a float of snow-covered hills and a mountain goat.

The pie and I finally arrived at my sister’s house at 6:00, having left my apartment at 9:00. Dinner was waiting, warm and welcoming, as were my relations.

And I must say, the pie was delicious. 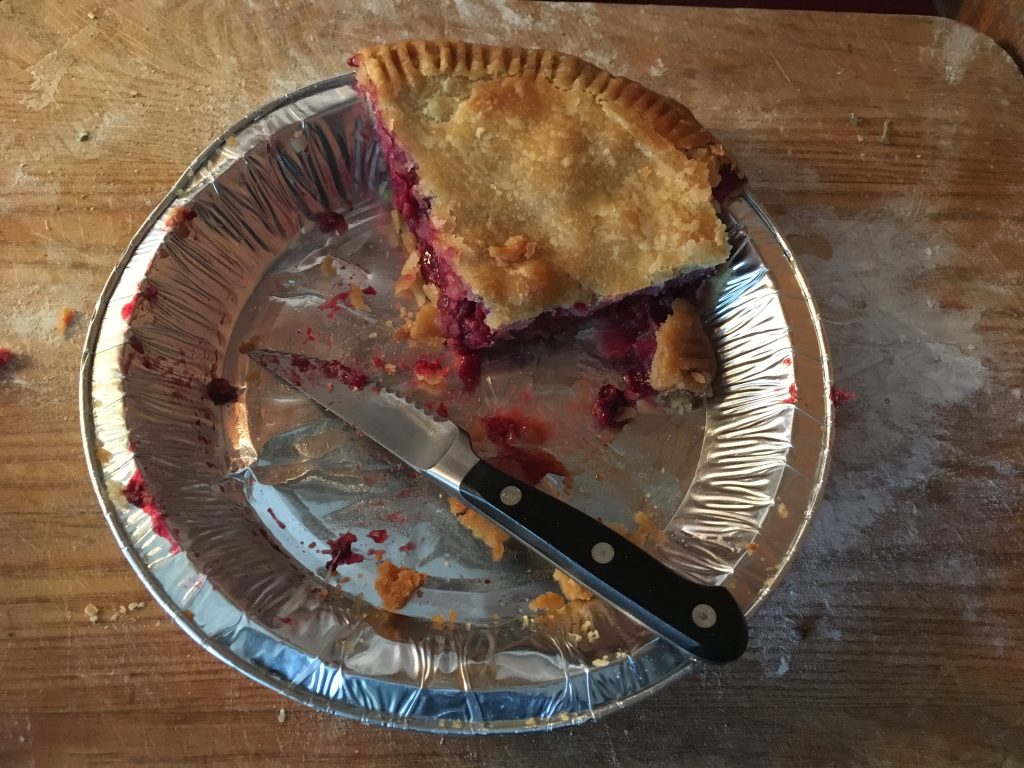