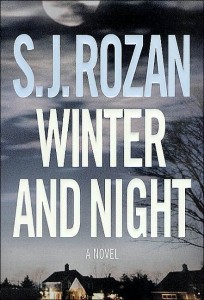 Q: Winter and Night is about football. What do you have against football?

A: Nothing at all. My argument is with adults who worship their sports-star kids and then make like the three monkeys when a sports star goes bad, as long as he plays on Friday night.

Q: Come on, if it were just sports you’d have written about basketball, which you actually know something about.

A: Well, okay. Football does have two things no other sport in this country has. One, it has the country’s complete attention. It’s bigger and more emblematic of the US than any other sport. And two, it’s the only sport where violence is inevitable and integral to the game (unlike, say, hockey or basketball, which can be played without harmful physical contact, though they’re usually not) but is in theory not the point (unlike, say, boxing, where violence is up front and direct).

Any given football play consists of a set of individual fights, where each player’s been assigned to bring down another, in the service of helping or hindering the quarterback’s attempt to move the ball. Moving the ball is supposed to be what the game’s about, but really, it’s the fights, the collisions, the hitting. If that weren’t true, the game could be played like a game of tag and the fans would enjoy it just as much. Not likely, huh?

Q: No, I guess not. But if you dislike the game that much, how did you know enough about it to write this book?

A: Ah, but I didn’t say I disliked it. I have a big love-hate relationship with sports, pro and amateur. Not the WWF, because that’s all choreographed, and not the late and un-lamented XFL, because that was just mean and stupid. But those football fights, they can be pretty exciting.

Q: So you didn’t have to do much research?

A: Yes, I did. I read a lot, both about football and about sports theory. I spent time with an ex-high-school-star friend, now a lawyer, who is both a terrific sports theorist and a good coach. He taught me the language of the high school football field, and helped me with the very few football scenes actually in the book. (Readers, do not panic, by the way: no games are actually played on-screen in Winter and Night; there are no play-by-plays.) And I spent some cold afternoons on the benches in high school stands. I particularly want to thank the boys of Teaneck, New Jersey, who didn’t even know I was watching, and who taught me a lot.

Q: Usually you get to do more eating and drinking when you do research.

A: Yeah, this one was pretty much peanuts and bad coffee.

Q: There are a lot of rotten kids in Winter and Night —

A: And a number of good ones, even heroes.

Q: Granted. But you seem to have a great deal of sympathy for the bad ones as well as the good ones.

A: I do. It’s very hard to be a teenager these days, much harder than when I was one. These kids are only trying to do what they’ve been told is good, what they’ve been shown they’ll get approval, even admiration, for, from adults. Unfortunately the adults are so morally bankrupt—and in many cases so un-adult—that what the kids are offered as a path to success is completely destructive to them and those around them.

Q: So it’s not their fault?

A: Their criminal actions are their fault. At a certain point peer pressure; evil, ignorant or self-motivated adults; the excitement of the moment—none of these things are excuses any longer. But that it comes to that is not their fault, it’s the fault of the adults whose job it was to guide them.

Q: And the horse they rode in on. Read any good books lately?

A: THE BLIND ASSASSIN (Margaret Atwood), THE CONSTANT GARDENER (John LeCarre), WHEN WE WERE ORPHANS (Kazuo Ishiguro), THE NIGHT MEN (Keith Snyder), HELL TO PAY (George Pelecanos). Slightly further back in the mists of time, Michael Connelly, Dennis Lehane, PD James. I’m in the middle of the new Carl Hiaassen, BASKET CASE.

A: The next Lydia Chin book is already in my mind, but it’s not next. Now it can be told—you’re hearing it here first. Next is an out-of-series book called Absent Friends.

A: After 9/11, moving right into the next Lydia Chin book, set in downtown New York, was impossible for me. I needed Smith and Chin to get some time and distance from 9/11; I needed to see what New York would become before I wrote about their New York again.

Q: So Absent Friends is set somewhere else, in some other time?

A: No. It’s set in New York in the first ten weeks after 9/11. The story keeps taking the reader back into the past, though.

Q: It’s about the WTC events?

A: No, but it involves them. It’s a dark story about the nature and uses of truth, a story that couldn’t have taken place, at least for me, anywhere else. Totally new characters and a complex structure. Structurally, technically, it’s actually something I’ve wanted to try for a long time; I just didn’t have a story that could use it. Now I do.

Q: But Bill and Lydia?

A: They’ll be back. They’re on vacation. They needed a vacation from me anyway—I can be irritating. And they’ll appear in short stories while I’m working on this new book.

Q: And maybe the sun and surf wherever they are on vacation will make them, well, romantic?

A: In Bill’s dreams.