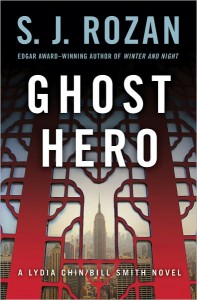 In a relentlessly chic and tranquil tea shop on the Lower East Side, I sat sipping gunpowder green and trying to figure out what my new client was up to.  That the client, Jeff Dunbar, sat across the table laying out the case he was hiring me for helped not at all.

“It’s about art,”  he’d begun, stirring sugar into his coffee after the pleased-to-meet-yous were over.

“Art?”  I’d tried to sound intrigued, as opposed to baffled, by this revelation.  Dunbar had called the day before, saying he needed an investigator and had seen my Web site.  I’d expected, when we met on this chilly, bright spring morning, to hear a problem that was personal — cheating fiancee, two-timing wife — or professional — industrial espionage, embezzling employees.  Straying spouses and shady secretaries are my daily bread and the Web site says so.  It doesn’t mention art, a specialty outside any of my areas of expertise.  If this case was about art, I had to wonder, why call me?

Dunbar sent a dollop of milk to join the sugar.  “I’m a collector.  Contemporary Chinese art.  Do you know much about that?”

Oh.  This had to do with my contemporary Chineseness?  “Not much, no.”

He nodded and settled back.  “It’s a cutting-edge collecting area.  Not really inside the PRC, even among the new rich, but in the West.  Chinese painters, especially, but also sculptors, photographers, installation artists — they’re all hot.”  His voice was pleasant, measured, as though lecturing at a symposium on the globalized cultural marketplace.  He looked the part, too: thirtyish, short dark hair, polished shoes, the only business suit in sight.  That his art and his prospective detective were both Chinese couldn’t be coincidence, but the detective’s ignorance seemed okay with him.  My antennae went up.  There’s a class of Westerners who ‘like rice:’ they’re attracted to Asians, or, really, to their own exotic fantasies.  If Jeff Dunbar had chosen Chinese art, and me, for that reason, he was about to get a fast good-bye.  And stuck with the check.

But he didn’t look it, and he wasn’t acting it.  Those guys invariably wear something Asian, at least a tie with a double-happiness pattern.  They order tea.  And, during Zen-like pauses, they gaze soulfully into my slanty eyes.  This Jeff Dunbar came across as a guy in a boring suit conducting a business meeting.

I decided to see where this was going.  “Tell me about this art.  I don’t think I’ve seen much of it.”  I ransacked my brain, came up with little besides misty mountains and pine trees from five or six dynasties back.  “Is it like classical art?  Ink on paper, that kind of thing?”

“Interesting you should ask that.  Mostly, no.  A lot of artists now work in western media — oils, acrylics.  But the paintings I’m concerned with happen to be inks.”  He set his cup down.  “There’s a painter named Chau Chun.  Referred to as Chau ‘Gwai Ying Shung’ — Ghost Hero Chau.  Have you heard of him?”

“Thanks.  Yes, I minored in it in college.  It occurred to me people who spoke the language would be increasingly in demand.”

Of course, except for the half-second pause before he said it.  “I didn’t mean to interrupt.  You were telling me about Ghost Hero Chau.”

“Yes.  Well, Chau was a young professor at the Beijing Art Institute in the 1980’s.  His work from that period is very valuable.”

“A piece will sell for around half a million.  A little more, a little less, depending.”

Yes, I thought, that would be ‘very.’

“A lot of artists his age were doing experimental work in those days,”  Dunbar went on,  “but Chau always worked in traditional media with traditional techniques.  He made brush-and-ink scrolls: mountains, plum blossoms, lotus ponds.  Classical-looking, and also traditional in another sense:  They were political, but in arcane ways.  Hidden symbols and metaphors, that sort of thing.”

“That’s traditional?  I didn’t know that.”

“Nature painting with coded commentary goes back to the Yuan Dynasty.  About eight hundred years,”  he added, in case I didn’t know my dynasties.  “The commentary’s aimed at educated people of the painter’s political persuasion, but the coding gives the painter deniability.  But don’t worry, Ms. Chin.  I didn’t expect you to have any expertise in this field.  That’s not why I called.”

“Recently, some new paintings of Ghost Hero Chau’s seem to have surfaced.  Again, inks, and again, political, criticizing the government, the Party, the economic free-for-all going on in China and the social disasters it’s causing.”

“I’m surprised that’s allowed.  Criticizing the government can get you in trouble over there.”

“Very much so, if you’re an activist lawyer, say.  Or a writer.  Artists, less often.”

“What makes them special?”

“Oh, it could be liberalization.  Those hundred flowers finally blooming.  Or,”  he smiled,  “maybe it’s that the artists are cash cows.  The West loves political work.  Collectors pay a fortune and the government takes a cut.”

“Well, so does ours, from our artists.  We call it taxes.  They call it something else but the result’s the same.  Also, there’s national pride.  Sky-high prices make China a player in the art world.”

“But if the paintings are critical?”

“Ah, but with visual works, you can always say seeing something as anti-government misses the point.  That it was meant as­ ironic, tongue-in-cheek.”

“And that’s what the artists say?  To keep the government off their backs?”

“It’s what the government says, to explain why someone’s allowed to say in paint what a writer gets years of hard labor for saying in words.  Of course, writer’s manifestos aren’t going for half a million U.S. dollars.  The artists who get in trouble are ones who don’t keep their mouths shut.  The ones who let their work do the talking are pretty safe.”

“I see.  So people like this Ghost Hero Chau are insulated by money.  I guess I’m not surprised.”

But Dunbar shook his head.  “Chau’s a special case.  For one thing, if what I hear is true, the new paintings are here, in New York.”

“If what you hear is true?  You mean you haven’t seen them?”  I was getting a glimmer of what this was about.

“That’s right.  I haven’t, and no one seems to know where they are.  I’m hoping you can find them.”

“That sounds like racial profiling, doesn’t it?”  He smiled again.  “I suppose it is.  It occurred to me if I wasn’t having any luck tracking the paintings through art channels, there might be another way.  I did an online search for a Chinese investigator.”

I might have taken offense, but after all, that’s why my Chinese clients come to me, too.  “Tell me something, Mr. Dunbar.  If no one’s seen these paintings, what makes you think they exist?”

“Rumors.  The collecting community’s always full of rumors.  Back-handed, of course, because everyone’s trying to beat everyone to the prize.”

“Can you give me an example?”

“Oh, someone sidles up to you at an opening and asks if you’ve heard this nonsense about the new Chaus, the Ghost Hero’s ghost paintings that don’t exist.  They’re hoping you’ll say,  Yes, they do, I saw them.  If you do they’ll ask where, as if you must be crazy, and when you tell them they’ll laugh and say you’ve lost your touch, someone’s passing off fakes and you fell for it.  Ghost Hero Chau, for God’s sake.  Then it’s,  Oh, look at the time, I’ve got to go,  and before they’re out the door they’re speed-dialing whoever you said had the Chaus.”

“And that’s been going on?”

“Variations of it.  For about a week now.  But I’ve spoken to the galleries and private dealers — I’m sure everyone else has, too — and I’ve gotten nowhere.  Only one gallery assistant even admitted to knowing what I was talking about, and then he backpedaled.  I think he realized he was in over his head.  The Chinese contemporary world’s pretty small and his boss must be as eager as anyone to find these paintings.  If I end up with them because this kid slipped me some inside info, and his boss finds out, he’s up a creek.  Plus, I just started collecting.  He might be willing to go out on a limb for one of the big collectors, but he doesn’t know me from a hole in the ground.”

A creek, a limb, and a hole in the ground.  Maybe these were nature metaphors with hidden political meaning.

“Mr. Dunbar, you’re not even sure these paintings exist.  Why not wait until they either surface, or it all turns out to be smoke?  I guess what I’m asking is, why is paying for an investigation worth it?”  It’s not that I wanted to talk myself out of work, but something wasn’t adding up here.

He leaned forward.  “For a collector, the hunt’s as much of a thrill as the find.  I want these Chaus, if they’re real.  But I also want to be the one who finds them, and finds out if they’re real.  Especially since I’m the new kid on the block.  Does that make sense?”

“I guess so,”  I said, though the collector’s passion, to me, is like gravity: I admit it has a pull but I don’t understand it.

Ah.  Time is money.  And money does talk.

“Asian Art Week starts on Sunday.  All over town: The auction houses, the museums and galleries, two big Armory shows, and a show the Chinese government’s sending over called ‘Beijing/NYC.’  Mostly classical art and antiquities, but a lot of contemporary, too.  The big collectors, the critics, the curators all come.  From everywhere — Asia and Europe, as well as here.  If these Chaus exist, whoever has them might be planning to unveil them then.”

“And you want them so you can make the splash.”

“I told you the collecting world’s small?  It’s also closed and clannish.  Some things I’m interested in I never get a shot at, because when they show up I’m not the one who gets the call.  I want that to change.  If I had the new Chaus, trust me, that would change.”

“All right.  But there’s something else.  I don’t know much about this, but wouldn’t an artist, or a dealer or somebody, whoever has these paintings, either just put them on the market, or not?  I mean, one or the other.  Rumors, mystery, paintings no one’s seen that may or not be real — is this how the art world works?”

“Normally, no.  But as I said, Ghost Hero Chau is a special case.  The possibility of new paintings by him would be bound to stir up all kinds of mystery and rumors.”

“Are you familiar with the uprising at Tiananmen Square in 1989?”

I thought for a moment.  “A democracy movement that never got off the ground, crushed by the Party.  That’s about all I know.”

“Correct.  They sent the army in against the protestors.  Hundreds of people were killed.  Including Ghost Hero Chau.  Ms. Chin, he’s been dead for twenty years.”