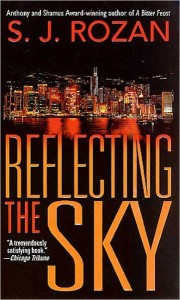 Lydia Chin, a Chinese-American private investigator in her late twenties, is hired by Grandfather Gao, one of the most respected figures in New York City’s Chinatown, for what appears to be a simple task.

Lydia, along with her professional partner Bill Smith, is to fly to Hong Kong to deliver a family heirloom to the young grandson of a recently deceased colleague of Grandfather Gao. They arrive in Hong Kong safely but before they can deliver the heirloom, the grandson is kidnapped and two, separate ransom demands are made.

While the family of the kidnapped boy tries to freeze them out, Lydia and Bill must quickly learn their way around a place where the rules are different, the stakes are high, and the cost of failure is too dire to imagine.

In which SJ interviews SJ about Reflecting the Sky

“As usual, it’s a fast-paced, rip-roaring ride. Great characters, intricate plotting, and an exotic locale, beautifully described — Who could ask for anything more? This is definitely a don’t-miss book in a don’t miss series.” Booklist (starred review)

“Even visitors to Hong Kong with no more experience than Lydia will find a lot more to treasure in the city than exotic backgrounds. Bill whose alternation with his partner (Stone Quarry, 1999, etc.) brings him up to bat next, will find it tough to top her this time.” Kirkus Reviews (starred review)