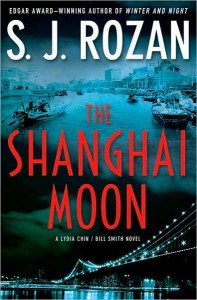 With The Shanghai Moon, S. J. Rozan returns to her award-winning, critically acclaimed, and much-loved characters Lydia Chin and Bill Smith in the first new novel in the series in seven years.

Estranged for months from fellow P.I. Bill Smith, Chinese-American private investigator Lydia Chin is brought in by colleague and former mentor Joel Pilarsky to help with a case that crosses continents, cultures, and decades.

In Shanghai, excavation has unearthed a cache of European jewelry dating back to World War II, when Shanghai was an open city providing safe haven for thousands of Jewish refugees. The jewelry, identifed as having belonged to one such refugee – Rosalie Gilder – was immediately stolen by a Chinese official who fled to New York City. Hired by a lawyer specializing in the recovery of Holocaust assets, Chin and Pilarsky are to find any and all leads to the missing jewels.

However, Lydia soon learns that there is much more to the story than they’ve been told: The Shanghai Moon, one of the world’s most sought after missing jewels, reputed to be worth millions, is believed to have been part of the same stash. Before Lydia can act on this new information, two men are murdered, Lydia is fired from the case, and Bill Smith finally reappears on the scene.

Now Lydia and Bill must unravel the truth about the Shanghai Moon and the events that surrounded its disappearance sixty years ago during the chaos of war and revolution, if they are to stop more killings and uncover the truth of what is going on today.

“A rich blend of historical mystery and contemporary suspense.”

“’I’m back,’ Lydia Chin tells her mother, and so she is, to track down a fabled brooch that’s at the root of violence past and present.  Rozan plots as expansively and ambitiously as ever… Welcome back, Lydia and Bill.”

“Using letters and journal entries from the 1930s and 1940s, Rozan sets the stage for the modern quest for missing valuables stolen during the Holocaust. She also gives us a brilliant look into the culture of Chinese American families today and an exciting mystery. Readers who have waited patiently for this one will not be disappointed. Highly recommended.”