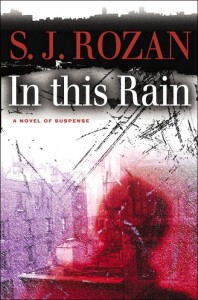 Three years ago, a child’s death blew open a vortex of corruption inside Manhattan’s lucrative construction industry. And it sent one innocent man to jail. Joe Cole is a former city investigator who now lives a broken life, cut off from his wife and daughter, and from the city he once knew so well. But for Joe, everything changes when a woman’s murder and a teenager’s rooftop freefall rip open old wounds—and reveal a shocking layer of rage and deception.

It is Joe’s former partner, beautiful, hard-charging investigator Ann Montgomery, who first sees the lies, forcing Joe out of his self-imposed isolation to help her unravel the cover-ups and secret relationships that allow the powerful to hide their crimes. Soon, the two are entering the darkest corners of their city, delving into the hidden desires of a borough president who wants to be mayor, the motivations of a charismatic community activist, and the machinations of a mayor whose ambitions know no bounds. As the secrets of each player are exposed, as the primal forces of greed, sex, and power come to the surface, Ann and Joe know they must press their search all the way to the end—because the most powerful revelations are yet to come.

From a brilliantly choreographed press conference to a scandalous love affair gone terribly wrong, In This Rain takes us into the heart of a sprawling, brawling city—in a masterpiece of suspense that proves once again the unique and daring genius of S. J. Rozan.

“… social fabric so dense and so convincing that everyone in the Big Apple, from power-hungry politicos to money-hungry developers to survival-hungry street kids, comes alive. An exuberant celebration of the rainbow city in all its crime-drenched glory.” — Kirkus

“This is a New York story, steeped in political intrigue, ripe with descriptions of the city and its history. The payoff will be particularly rewarding for readers interested in big machines, both the kind that move earth and those behind political parties.”— Publishers Weekly

“From the mean streets of Harlem to the chilly corridors of City Hall, Rozan vividly evokes New York City in all its sound and fury.”– Booklist

By Dick Lochte, Special to The Los Angeles Times

To make a “long story short, in an isolated setting the developer has to include housing for the waiters, gardeners, and maids. Something they can afford … it’s necessary. Otherwise you get a trailer park springing up down the road. That will lower the price point of your units.”

The speaker is a pragmatic cold fish of an architect, explaining to Ann Montgomery, a New York City Department of Investigation officer and the protagonist of S.J. Rozan’s new novel, In This Rain, precisely why a developer’s plans for a ritzy project in the middle of Harlem need not include small rental units to aid the locals.

That this sequence has the ring of authenticity is probably because the author is herself a New York architect. But as Montgomery lead-foots her Boxster around Manhattan, determined to deconstruct a smarmy, and possibly homicidal, developer’s plans of worming deeper into the Big Apple, the author displays an equally intimate knowledge of the way things work in other areas of the city, notably its political, ethnic and criminal corridors of power.

The novel is a murder mystery, make no mistake, but it also may be the most Manhattan-centric entertainment to come our way since Woody Allen switched his cameras to London. Its main point of interest is Block A, a hunk of prime Harlem real estate that the city is putting into play. The developer, Walter Glybenhall, whose clout is mightier than even the Donald’s, wants to transform it into a gentrified neighborhood with elegant town houses and jazz clubs for the tourist trade. His opposition is Ford Corrington, a righteous Harlem civic leader who objects to the space being turned into “a theme park,” when it could better serve the needs of locals. Caught in between is Mayor Charlie Barr (think John Lindsay with a shade less conscience) and his dream of becoming the next governor.

When “accidents” escalate at a current Glybenhall construction site and a woman is killed by a dropped brick, the press and the people want to know if it’s carelessness or, as the developer claims, sabotage, designed to discredit him at a time when bids on Block A are being considered. Charged with investigating allegations of corruption and criminal misconduct by those doing business with the city, the DOI puts Montgomery on the prowl. She immediately seeks the assistance of her former partner, Joe Cole, whose last attempt to clean up the construction industry was rewarded with a trumped-up prison sentence. Only recently released, he is a pariah eking out a meager existence while nurturing an elaborate garden behind his rented cabin — not exactly eager to see her or to talk business.

But Montgomery knows Cole has a genius for sniffing out mendacity and she is nothing if not persistent. For approximately the first third of the book, her attempts to court his help are interspersed with sequences setting up the novel’s rather convoluted plot while introducing its large cast of city pols and their minions, wheeler-dealers, gang-bangers, construction workers and society gals, nearly all of them, Montgomery included, with hidden agendas. These pages contain a bit more information than is needed. For example, while it is important for us to be aware of the people and events that contributed to Cole’s arrest and conviction, some of his back story — particularly the sequences depicting his life in prison — do little more than slow the plot.

This is unfortunate because, while perusing these smoothly written but leisurely paced pages, readers seeking nothing more than the occasional adrenaline rush from a competent thriller may grow restive. They would be wise to hang in for just a little longer, at least until a key player in Cole’s downfall pops up.

That’s when the puzzle pieces Rozan has carefully laid out start to take shape, the pace quickens and the energy level ratchets up and remains high until the breathless denouement.

Adding to the overall effect is the novel’s New York vibe, reflected not only in the loving attention paid to the passing scenery but also in the language and attitudes of the characters. Roaring down the crowded streets, leaving road rage and near accidents in her wake, Montgomery is both aggressively self-centered and tremendously appealing. The same can be said of the city.

Rozan doesn’t shy away from the island’s coarseness and fondness for corruption, but she also pays homage to its vibrancy and hard-boiled beauty. You close the book completely convinced of its dangers and duplicities, but you also may find yourself hoping it’s not too late to plan a trip eastward in the spring.

Award-winning mystery writer S.J. Rozan’s latest book, In This Rain, is about — isn’t everything these days about? — New York’s redevelopment. A standing-room-only crowd turned out last night at Partners & Crime, in Greenwich Village, for a launch reading of the book, set squarely at the intersection of developers, activists, and City Hall in the gentrification of Harlem. (A large portion of Rozan’s research, she said, apparently involved consuming sticky goods at Wimp’s Bakery on 125th Street.) So who gets a cameo in this whodunit?

“There’s a character who’s Bloomberg, and people keep telling me they see him in the book,” commented Rozan. “But they also keep seeing Rangel. Poor Rangel! I didn’t mean to have him in there.” No word yet on whether Harlem’s most presidential neighbor gets a role — or whether people think they see him there. — Lizzie Skurnick, New York Magazine

SJ Rozan is a good writer in the process of becoming a great one. The promise that has been evident since Concourse, second in her mystery series, is now coming to fruition.

In This Rain tells a story of corruption and passion in New York City’s building trade. There are multiple narrators and Rozan takes her time letting us get to know them, drawing every character with consummate skill. Basically the story centers on Anne Montgomery and Joe Cole, former partners at the municipal Department of Investigation, which works at the Mayor’s behest to keep developers in line. In a previous investigation, Joe was accused and wrongly convicted of criminal behavior, and Anne was exiled to the boonies. Now they both have a chance to right previous wrongs. But nothing is simple here, Anne‘s vibrant, risk-taking personality keeps her at risk, and more wrongdoing happens apace.

The great pleasure in reading this book comes from how smoothly everything fits together. Each piece of the complex plot slides into place when you least expect it to, producing that oddly satisfying feeling you get when a recalcitrant jigsaw puzzle piece suddenly slips in. Best of all is the way the powerful denouement recalls the imagery of the opening quote that is also the title source: “In this rain/I can’t even see the garden.” — Mystery Scene Magazine

IN THIS RAIN — A Reader’s Guide by Gary Warren Niebuhr

Why is a garden so important to Joe?

Why does Ellie Cole not stand by her man?

What makes Ann such a dogged investigator?

How guilty should Ann feel about her father’s death?

The author chose to use a style that switches viewpoints. Whose point of view was your favorite and why? What scene from this book do you like most?

What role does the city of New York play in this novel? Why do you think this story could or could not happen in your own home town?

Why is Mayor Barr a fair or crooked politician?

Is the government portrayed in this book corrupt by its very nature, or are the people who operate within it always going to be tempted?

What should be Harlem’s ultimate fate in this book?

Is justice served at the end of this novel?

What do you think will happen to Joe and Ann after the story in the book?

Why did the author chose this title for the book?