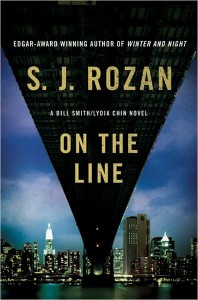 P.I. Bill Smith is sent on a high stakes chase when an electronically modified voice on his cell phone informs him that Lydia Chin, his occasional partner, has been kidnapped. Now if Bill wants to keep Lydia alive, he’ll have to play an elaborate game of the kidnapper’s devising.

The first move sends him to an abandoned building where Bill finds the corpse of a small Chinese woman dressed like Lydia and the building being rapidly surrounded by police. Now Bill is on the run from the cops and in the worst trouble of his very troubled life.

With the help of Lydia’s hacker cousin Linus, and Linus’s cohort Trella, Bill has to not only stay one step ahead of the cops, he has to uncover the secret behind the kidnapper’s identity and the reason he’s come after Bill, if he’s to reach Lydia before it’s too late.

In which SJ interviews SJ about On The Line

Lydia Chin’s been kidnapped, and Bill Smith has only 12 action-packed hours to find her.

The robotic voice in an early-morning phone call informs New York private eye Bill Smith that Lydia Chin, his partner in more ways than one (The Shanghai Moon,  etc.), has been snatched by someone who insists that Bill follow a series of cryptic clues if he wants to see her again. The deadline-juiced taunts, a specialty of Jeffery Deaver, were a cliché long ago, but this time there are a couple of nifty new twists. The very first set of clues send Bill, together with Lydia’s cousin Linus Wong and his resourceful friend Trella Bartoli, to a defunct bar in Red Hook, where he finds a dead Chinese hooker, her very live pimp and his goons and a police cordon Bill miraculously manages to slip. “Now you can’t go to the cops plus you have to dodge them!” gloats the kidnapper, tactfully omitting the fact that Bill has also become persona non grata among Chinatown’s human-smuggling community. Soon after a second set of clues sends Bill to a windy Manhattan rooftop, he figures out who his tormentor is. But he’s still condemned to spend the rest of his day racing around New York trying to rescue other Chinese illegals and get a bead on the kidnapper while dodging cops and smugglers alike.

All the twists you’d expect from Rozan, but speeded up within an inch of their lives, just like the summer movie this yarn ought to spawn.

Expecting his partner Lydia Chin’s voice when he picks up his chirping cell phone, PI Bill Smith is shocked to hear an unidentified man on the line, telling him that Lydia is a hostage—and Smith has 12 hours to locate her before she will be killed. Clues to her whereabouts come by phone, delivered by the heckling voice of a man obviously out for vengeance. But for what? To help him track the kidnapper, Bill enlists the aid of Lydia’s nephew, a crackerjack young techie, who brings along his goth girlfriend, a force to be reckoned with all by herself. The trio, aided on the sly by Lydia’s cop-pal Mary, runs a race against the clock, finding little related to Lydia but a lot of kidnapped Chinese prostitutes who need saving, and a vicious pimp who thinks Bill is wrecking his business. With zilch to go on, Bill sees only one option: play along until the lunatic makes a mistake. Of course, that eventually happens, and the action never stops until the lost is found. A high-velocity entry in a reliable series. — Stephanie Zvirin

At the start of Edgar-winner Rozan’s exciting 10th novel featuring New York City PIs Bill Smith and Lydia Chin (after 2009’s The Shanghai Moon), Bill receives a phone call from someone using Lydia’s cell who claims to have kidnapped Lydia. Lydia gets on the line long enough for Bill to realize this is no joke. The fiend gives Bill a 12-hour deadline, doles out clues that lead to other victims, and changes the “rules” just to keep things interesting. Forced to improvise wildly, Bill finds himself at odds with the cops, who consider him a suspect in at least one murder, but he’s fortunate to have such supporters as Lydia’s cyber expert cousin, Linus Wong, and Lydia’s best friend, NYPD detective Mary Kee. The tension rises as Bill tries to figure out who the villain is and how he can get ahead of someone who holds all the high cards. Some neat twists keep the reader guessing to the surprise kick ending. (Oct.)

A phone call informs Bill Smith that he has 12 hours to find his partner, Lydia Chin (The Shanghai Moon), who has been kidnapped and hidden somewhere in Manhattan. Smith must follow the clues provided, and there may be no contact with the police. Of course things go wrong from the get-go. VERDICT Rozan, winner of a host of crime fiction awards, comes up with new twists on the literary form and manages to kick it up a notch or two every time. This one is like a video game in which every location is full of lurking danger, technology is used to find information, and failure is possible at each turn. If you long for heart-stopping action and the most original characters outside of P.J. Tracy’s Monkeewrench Gang, look no further. [Library marketing.]