It’s spring and the waterfowl on the river are busy as bees, or beavers. This morning two pairs of mallards were swimming around, with a male Gadwall in attendance. One of the male mallards swam away from the little flock, which caused two events. First, the female he’d been with zipped over to him, swam right in front cutting him off, and then settled in right beside him, reminding him who he belonged to. The Gadwall, meanwhile, came over to harass them. That left the other mallard pair on their own, but not to worry: a female Gadwall came flying in, landed behind them, and started annoying them. What does this say? That the Gadwalls, as they’ve done before, are nesting in the bushes by that stretch of river and the mallards were getting too close in their own search for a nest site. Also, that female mallards like to keep their males in line.

And speaking of nesting, those of you who remember the goslings born last year on the rocks by the Sanitation Pier and raised in the park by Mama and a very fierce Papa may be happy to know M and P have nested again, and I think she must have eggs in there because he’s been swimming back and forth patrolling for enemies. This is the best photo I could get so I’ve circled them in red. Papa in the water, Mama in the upper left of my circle right up by the wall. Just after I took this a crow flew in and landed near her. Papa lifted out of the water and flapped over, practically sat on top of it. It left in a hurry. Hatchlings coming, I hope! 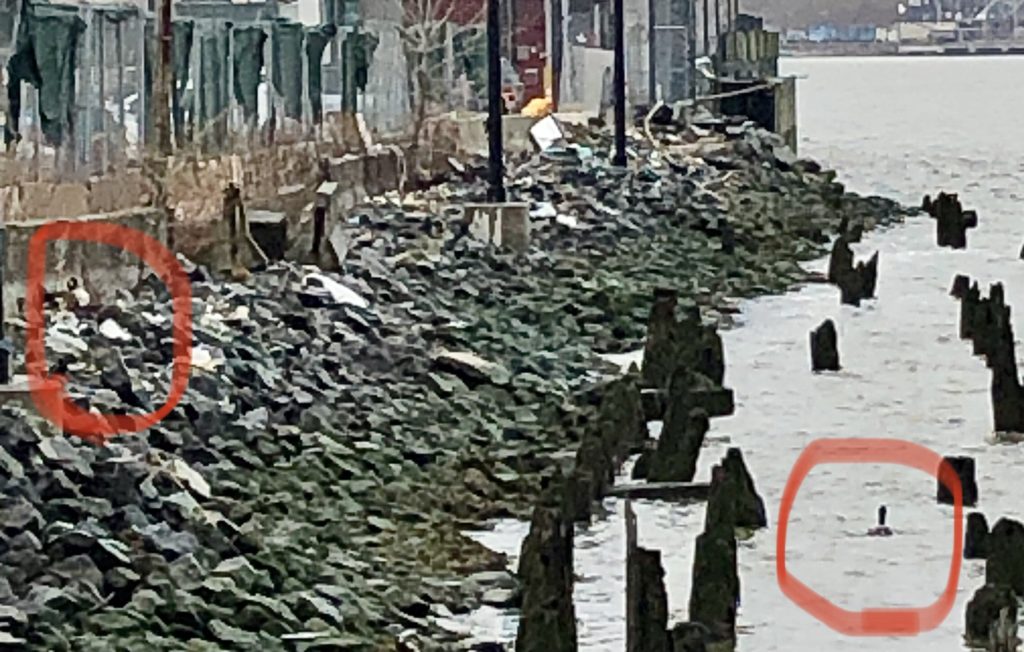