Spring seems to be finally here, after a very tough winter in NYC. Last week the crocuses started popping, and now the daffodil buds are all swollen and even some of the early tulips are up. Not that it’s early anymore, which is why all these plants are falling over each other in their eagerness to bloom. All the wintering waterbirds are still here, and we’ve had quite the abbondanza this year: the resident mallards, Canada geese, and Gadwalls; the expected buffleheads and Brant geese; and this year, a pair of American black ducks who came last winter, hung around all summer, nested, and are still here; and a pair of common mergansers, who generally fish alone but when they want company hang around with the buffleheads. I saw a flock of about forty Brants this morning heading north in a sloppy V. They were too low to really be leaving, so I figure they were just practicing, but I’m sure they and the buffleheads will be gone soon. Maybe the mergansers, too; we’ll have to see if they like it here enough to stay.

The most exciting river news, though, is in the photos below. One icy day I noticed white splotches on one of the pilings. Luckily for me I ran into Urban Naturalist and before I could get a word out he asked me if I’d seen them. I said yes, and he said, “Oysters!” And by golly, that’s what they are. Oysters used to be a huge crop in this area, so huge that oyster shells were used as ballast for ships and to pave the streets. Pollution destroyed them, but in recent years river and bay cleanup has made it possible to re-introduce them in oyster farms on Long Island. We have a successful one near us at the Rancho. What’s happened on the Hudson is thrilling if you’re a geek like me, because this is no oyster farm. Tiny oysters have come around the bay on the tide and glommed onto the seawall. You can see little white dots in the photos; those are the new ones. The big white spots are last year’s, or maybe even the year before’s. Now the bad news is, the ones you’re seeing here are all dead. That’s why you can see the white — it’s the inside of the shells. It’s not clear why they didn’t make it, though my theory is they attached themselves too high and were unprotected in the many hard freezes we had this winter. If oysters make it here it’ll be the ones that float by at low tide and grab the wall and the pilings then, so they’re almost never exposed. That theory is supported by the biggest one, which you can see attached itself low inside the drainage culvert, where it would have been more protected than the other spots and gotten a chance to grow bigger. That, of course, is just luck: they attach themselves whenever the tide brings them by. We’ll see in future years how it goes. But knowing the river clean-up’s gone far enough that oysters are making a comeback is quite a thrill. 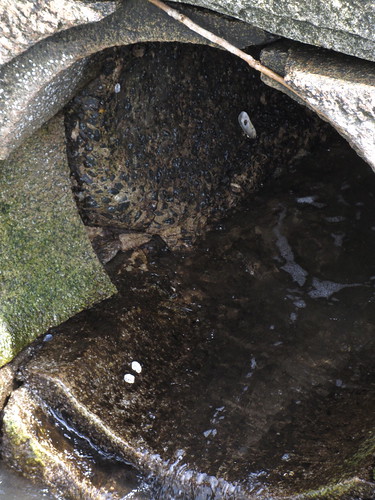 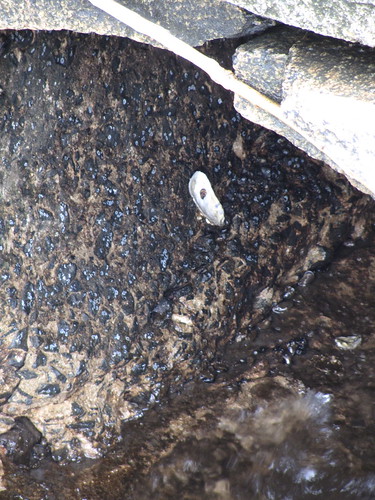 oyster in drainage culvert gets its close-up 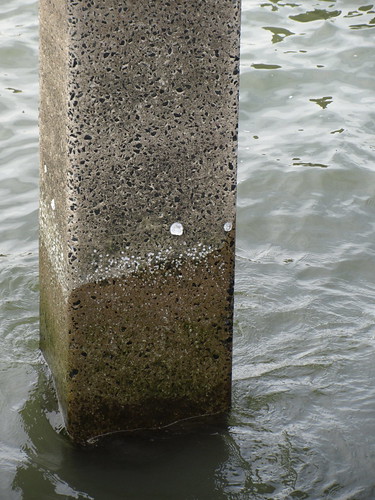 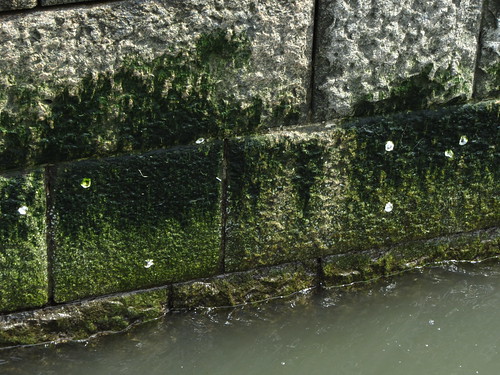