Lots of bird action at the Rancho these mornings. It’s nesting season, so the dawn’s full of mating calls, territorial songs, warning signals. Up in the top of the huge pawlonia — apparently more properly spelled “paulonia,” and also known as an Empress of China tree — an ongoing battle of blue jay versus crow has been recurring like Groundhog Day. (Or like Edge of Tomorrow?) A crow perches on the highest branch and grooms its feathers. A blue jay flies at it, squawking. The crow bats at the blue jay, which dives away after getting in a peck or two, which annoys the crow and calls for more grooming. This can go on for fifteen minutes, while I get a stiff neck from watching. Eventually one or the other will fly away. Yesterday it was the crow; today, the blue jay. I don’t know where the nest is that the jay’s protecting. It’s not in that tree, and the pawlonia stands alone in the yard, so wherever the nest is it’s far enough away that I wonder why it’s worth it to the blue jay to drive the crow from that particular tree. By now it’s probably a grudge match, an avian Hatfield/McCoy thing. 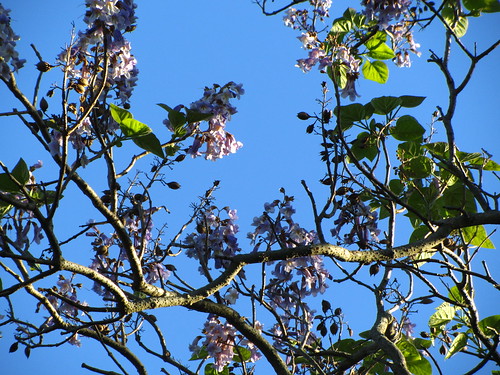