Babies bustin’ out all over!

Last week we had a raccoon sleeping in the tree right outside my window. 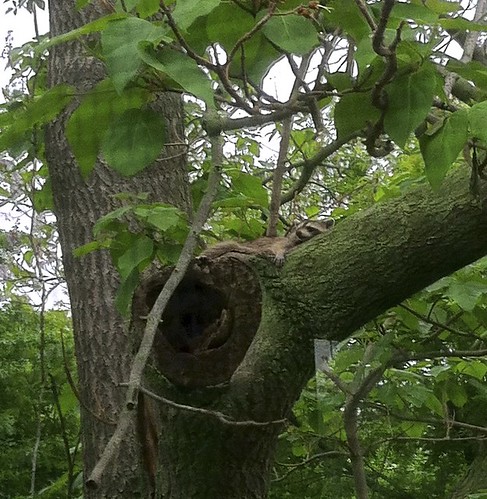 Raccoons live in dens when they’re raising their young and then abandon the dens, foraging at night and spending the day in a series of what are called “rest areas.” (I can see the New Yorker highway cartoon now.) We postulated that this smallish beast had grown up in the nabe and the pawlonia was one of its chosen rest areas. As it turns out, we were right and wrong. It’s a she, and she may have grown up here, but the reason for the tree-limb snooze was to get away from the babies for a bit. She is mama. This morning I was having my tea under the pawlonia as usual and heard what I took to be bird-scrabbling sounds. Looked up and there in the hollow where once was a big limb, voila! a tiny ringed tail. I watched for twenty minutes as baby raccoon faces peeked over the rim of the hollow, as tails draped it, as little paws grabbed for a handhold. Their nails aren’t up to digging in yet, so they’re not ready to leave, but they were wrestling with each other and with the tree. There are at least two, which is how many I saw together, but there may be more, because each time I saw a single one how could I know it was the same one? Finally they stopped appearing and the hollow got quiet. Raccoon bedtime.

Meanwhile, there’s a crippled doe who lives in the woods behind our compost heap. She spent all last summer hobbling around on her three good legs. Unlike dogs, who can lose a leg and just go on balanced and bouncy as if they’d been born that way, three-leggedness is difficult for a deer. We didn’t expect her to make it through the winter, but she not only made it, she’s produced. Two fawns followed her out into the yard, nibbling on everything within reach.

Baby robins and catbirds, baby crows, a blue jay nest, a baltimore oriole nest, baby ospreys on the causeway, and limitless spiders spinning webs for limitless and interesting-looking other bugs — on this first day of summer, here on the North Fork, life abounds!