So this is life in NYC: last Wednesday, I’m at the Japan Society for a conversation between Sen So’oku, a 15th-generation tea master, and Hiroshi Sugimoto, a fabulous photographer, called “from Sen Rikyu (the found of So’oku’s school) to Marcel Duchamp.” I wasn’t sure they could pull it off, demonstrating a connection. But they did. And both of them so completely funny and charming! Even though So’oku only spoke in Japanese, with a translator.

Saturday night I’m at a tiny downtown theater for a production of WAITING FOR GODOT. In Yiddish. With supertitles, my Yiddish isn’t up to Beckett. Moving and beautiful. Makes it into a whole new play, because it puts what we now call the Holocaust front and center, which, when Beckett started it in 1946, was apparently what was on his mind — the war, the extermination of the Jews, and the very personal death of a Jewish friend who was released from a camp when the Allies swept through, but too ill to survive.

Sunday, the Brooklyn Literary Festival, where not only was I on a totally fun panel, but before mine I went to one with Franketienne, Vikram Chandra, and Phillipe Petit! Moderated by Elissa Schapell. On creativity. This was a good week for that, I think. So here’s a photo of my own panel, and if you’re of my tribe, here are best wishes for a sweet new year. 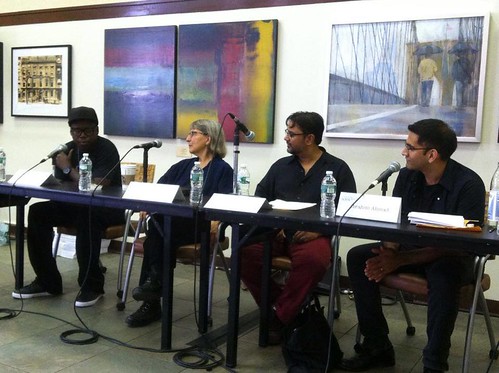