About that baby goat…

The following is the story of my weekend.

Many of you know I have Four Fabulous Nephews. The bad news part of the story is that the oldest of them, a JetBlue pilot in his 40’s, has colon cancer. The good news part of the bad news is that the type he has was found early and is apparently eminently curable, though the cure involves a long, unpleasant process: heavy duty chemo, which he recently finished, followed by lighter chemo and radiation, followed by surgery, followed by more surgery to finish the repair. So, very unpleasant, but successful some huge percentage of the time.

He’s sweet, friendly, frank, and generous, this nephew. In short, Fabulous. In typical fashion, he didn’t keep his illness a secret, thinking knowing about it might push other people to get exams, help, etc. When his friends found out they wanted to do something for him. There’s not a lot one can do — he has good health insurance, so he doesn’t need a fundraiser, even — but a bunch of them decided to put on a concert honoring him and raising money for cancer care.

More on the friends later. This nephew lives in Saratoga Springs, so the concert venue chosen was the Proctor Theater in Schenectady. (Proctor jokes re: colon cancer are acceptable but I believe they’ve all been made.) My sister Debby from Philadelphia and I decided to go up, and Debby’s friend Alice came along.

First up, I met them in Newark because Debby refused to drive into NYC. When I got to the parking lot meeting place I saw this: 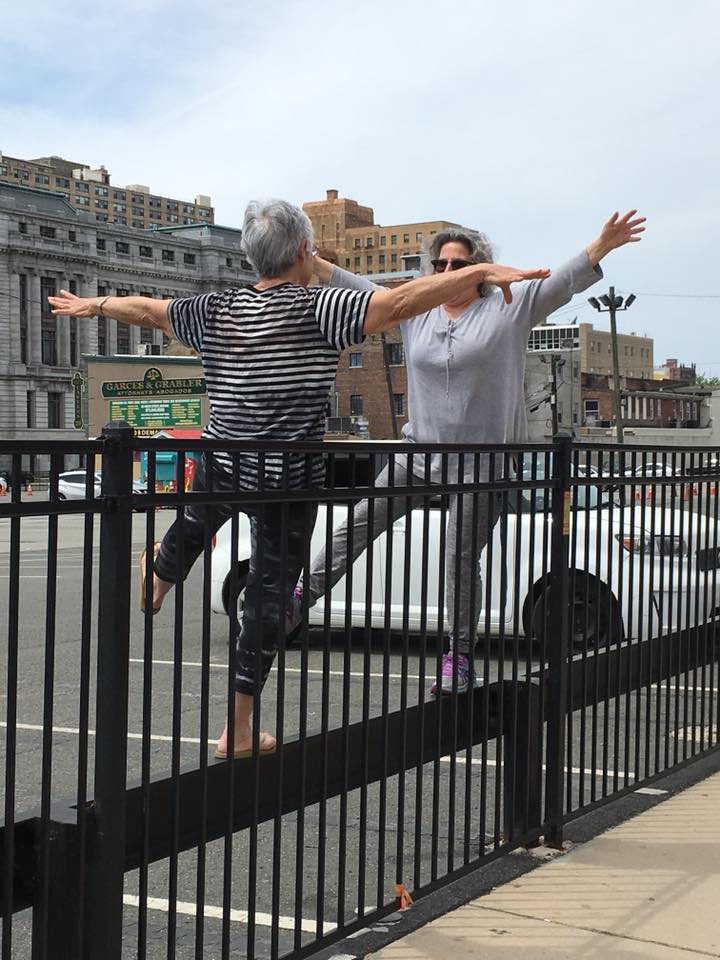 because after all Debby and Alice met in circus class.

Next, the drive to Saratoga, where we joined a bunch of family for bbq dinner and a little hula hooping. 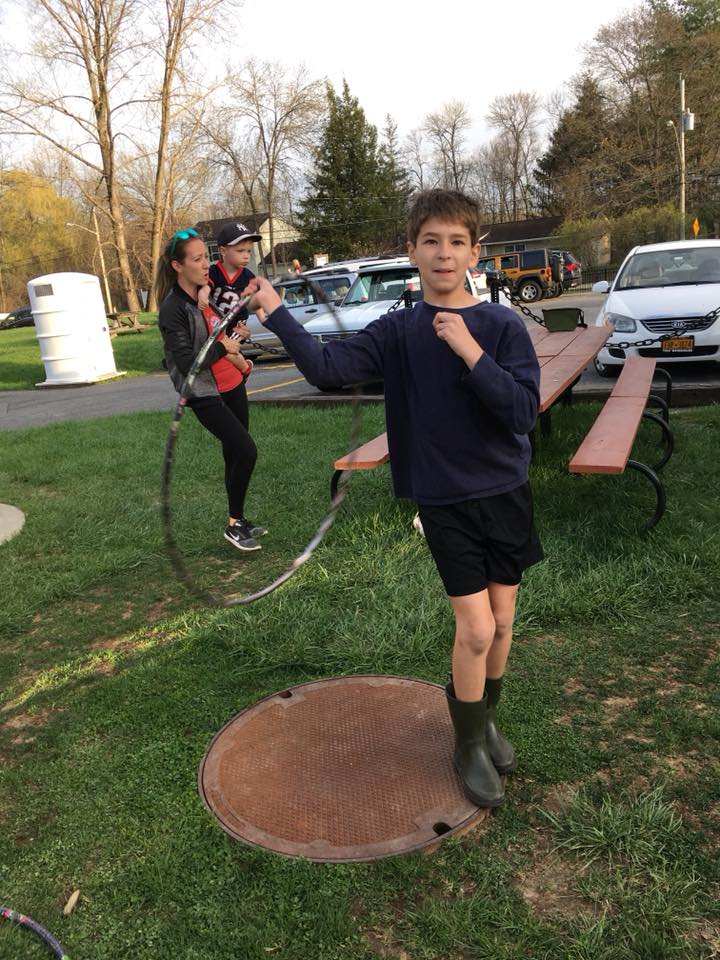 Then Debby, Alice, and I went on to our evening’s accommodation: a yurt on the Mariaville Goat Farm. Debby found it online. She sent me a couple of B&B options, but this looked so much like Mongolia I couldn’t resist. 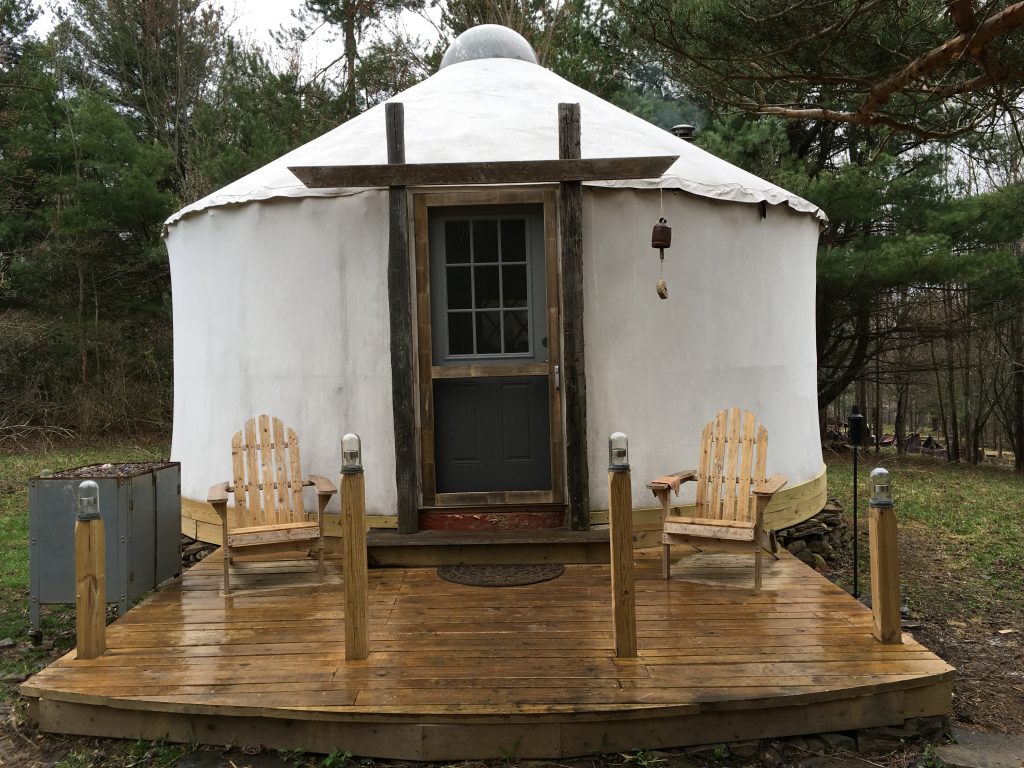 It has glass in the door and it has windows, neither of which a Himalayan yurt/ger will have, and it’s built a little differently. But the coziness of a yurt at night, especially with the rain falling softly around; and the sounds of goats in goat conversation, are exactly the same. In the early morning, tea outside, birds chirping in the mist; then breakfast, supplied by the lovely Ed and Rick, who run the place — it was heavenly. Yes, before you ask, a yurt has no plumbing, there’s a outhouse. I promise you it’s cleaner, brighter, and more welcoming than most of the public bathrooms you use. 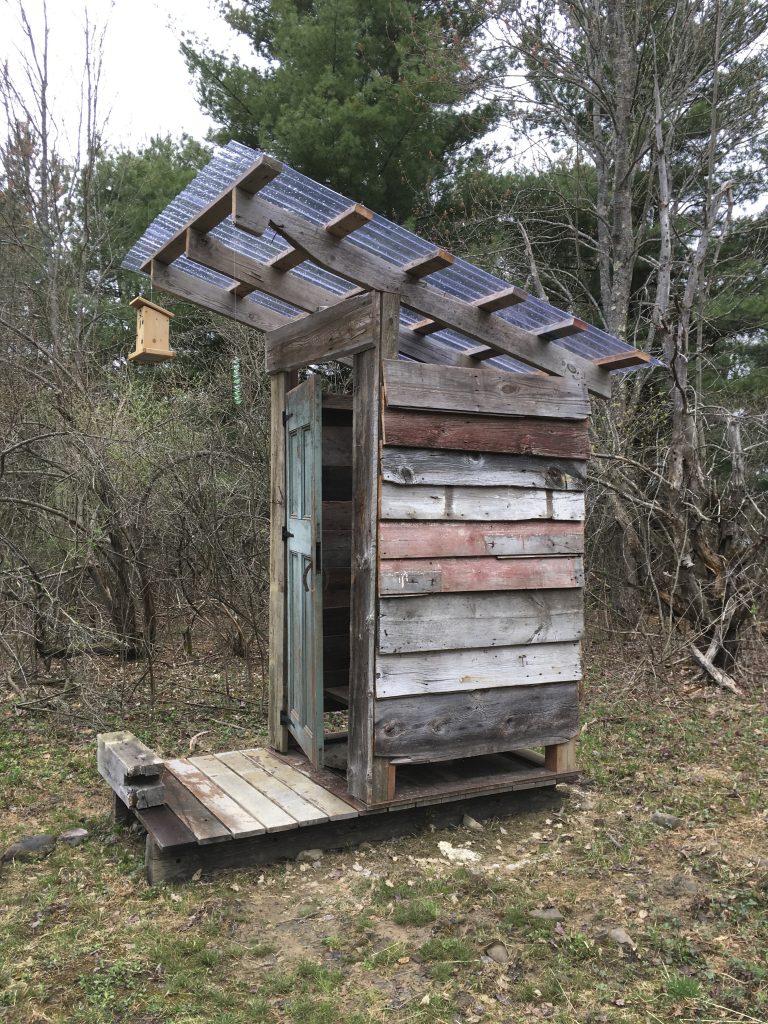 So there we were, waking in our tranquil yurt in the morning, hanging out, but we had to pack up our stuff and put it on the shelves by 10:00 because it was time for — goat yoga! Yes, Yoga for the Journey offers yoga in the yurt. With goats. This was something I’d never heard of, but it seems to be a thing (google it, go on) and it was great! The perfect thing for stretching out and, well, petting baby goats at the same time. Which you know you always wanted to do, right? 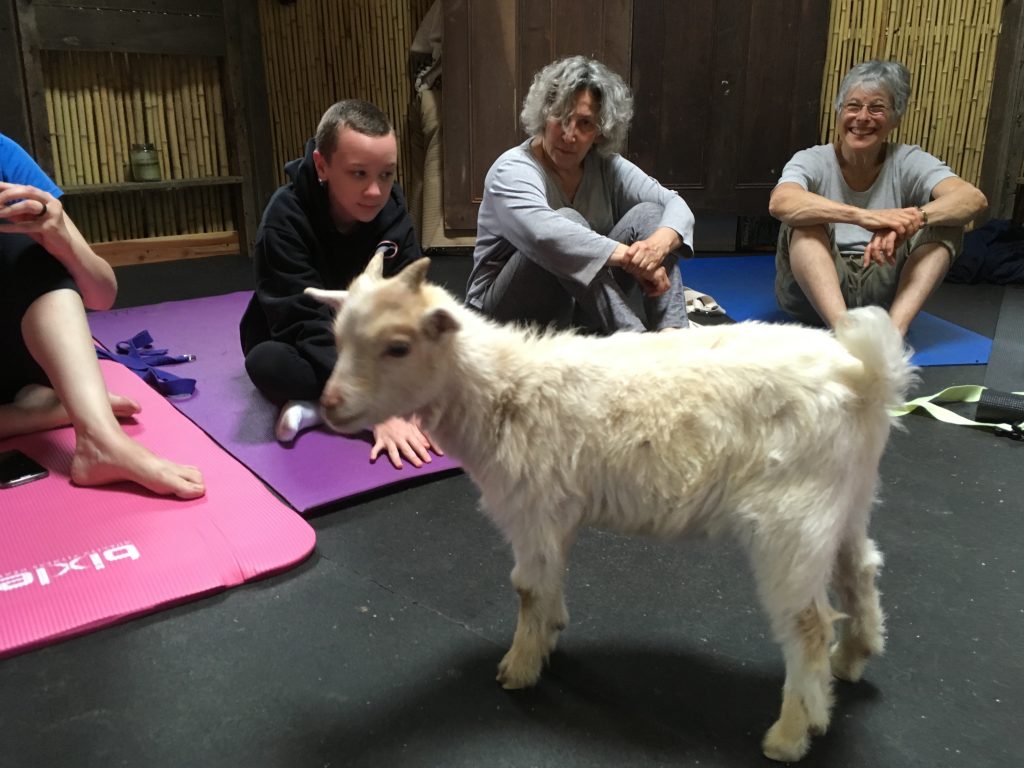 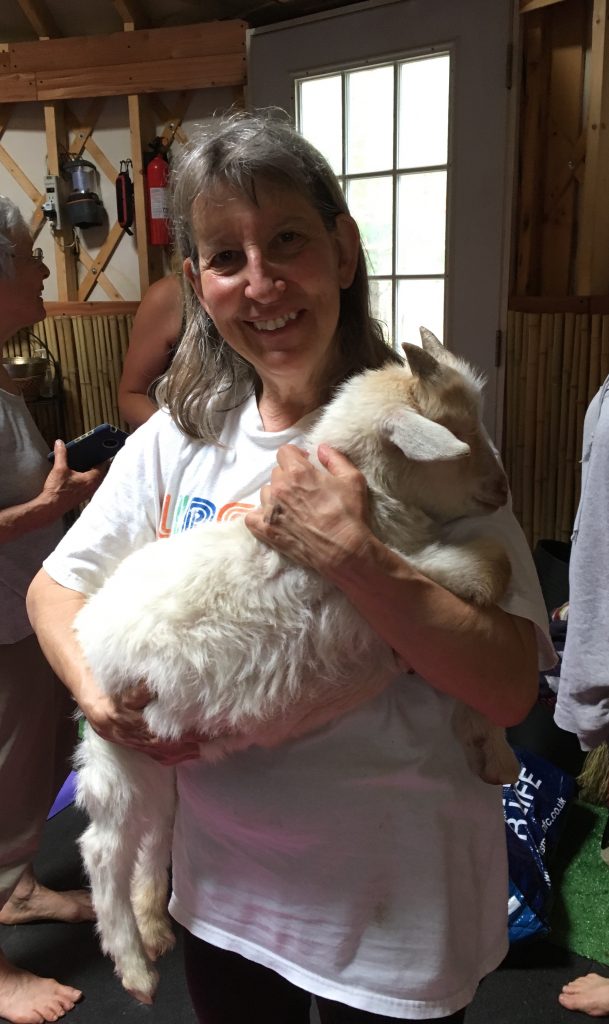 Finally, we had to leave the farm, sigh, and head down to Schenectady for the concert. So, as I said, the concert was organized by the nephew’s friends. Who are they? Well, Nephew is a bagpiper. Yes he is. The concert was bagpipe soloists and bagpipe-and-drum bands, from near and far, all donating their time and talent —  and renting the hall — so the ticket revenue could go to a cancer charity of Nephew’s choice. I love piping and this concert was just great. Also, great to see how the piping community came out to support one of their own. 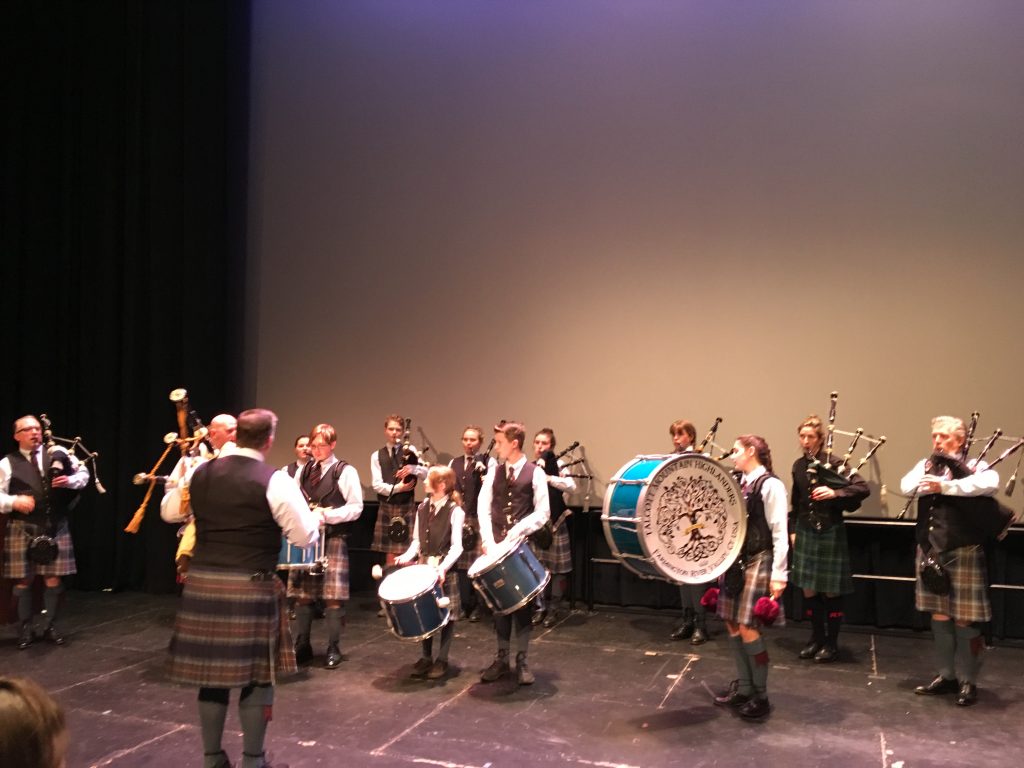 After it was all over, we headed happily south, back home. We drove through pouring rain — that was my part of the drive — then Debby and Alice dropped me in Newark and continued on in clearer weather. I took the PATH to the subway and got home just about midnight. I jumped in the shower before Bella the Cat even noticed I smelled like goat. Though, for all I know, she wouldn’t have cared. What a great weekend!