A restaurant called Caliente Cab Company, which has been on the corner of Bleecker and Sixth for decades, has a giant foaming Margarita in a golden cup on its facade. Apparently the Margarita has recently been attracting pigeons. Management has installed a robotic owl to scare them away. Apparently it doesn’t work. 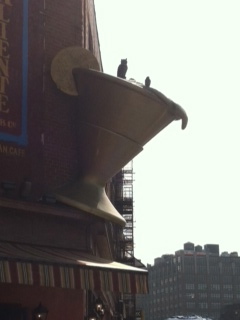