And the river still flows

Lots of action on the river this morning. A pair of Canada geese swam south; a pair of Brant geese swam south a few minutes later, then turned around and swam north. I wondered why until I saw, about twenty feet behind them, the Canada geese also swimming north — that is, escorting the Brants out of Canada goose territory. A cormorant flew low over the water and dropped into the area at the end of the piling field where a male bufflehead was already fishing. A male red-breasted merganser popped up from his underwater fishing grounds. I saw the female yesterday. He must have been finished with his breakfast because he swam a ways out, groomed his feathers, and stuck his head under his wing for a nap. A pair of mallards glided in for a landing on the pilings. Then the male Canada goose set up a major squawking fest, as another pair of Canada geese swooped overhead, but lifted again and didn’t land. Mid-February, Canada goose mating season. This land may be your land, but this stretch of the river is mine all mine!

Red-breasted merganser photo not mine; it’s from allaboutbirds.org. I thought this post needed a visual, and he’s so cute. 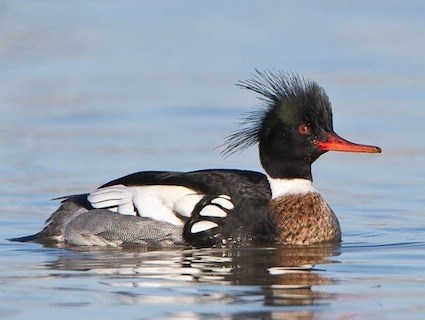